In celebration of our upcoming 3rd birthday(towards the end of August 2005) we are launching a new section dedicated to Brands which were in use at the turn of the previous century and which are still going strong. Initially we will be concentrating on South African brands and products but eventually the scope will be widened to include any products still available after 100 years.

We have identified at least 15 products which have a proud marketing centenary history and will, in the ensuing months be contacting the Companies currently involved in the manufacturing / distribution of these products in the hope of gaining their support for an individual page dedicated to their particular product or brand.

No apology is given for the sometimes shaby appearance of the new product bottles and tins. I dove into the grocery cupboard and the garage (shed) to find what I could at the present time. You and I have grown up with these products never realising their rich and interesting history. Antique Bottles.co.za hopes to enlighten you and make you more aware of the wonderful legacy embodied in these mundane household products which we so easily take for granted.

This might seem like a strange place to feature Bakers Biscuits, but this interesting half size Christmas Pudding bowl, was recently dug from a c.1915 dump. A German, Mr Baumann, had a thriving biscuit bakery in South Africa in the early 1900's.

At the outbreak of WWI (not surprisingly) he changed the company name to Bakers Biscuits. You can increase the picture size by pressing ctrl + and you will clearly see a British flag atop the pudding next to the holly. Note also that the left handed baker (pencil behind left ear) has become, in modern times, more politically correct. Press ctrl 0 to return to normal size.

The two most commonly asked questions which we are answering relate to Bols products. One is asking for information on the origin and value of the saltglazed earthernware Gin bottles which are being found literally all over the world and the second, the Bols Ballerina bottle pictured above.

Two past and two present Bovril bottles. On the right, a Centenary special edition showing an early marketing concept.

I cannot remember when I last went for a dig and did not return with at least one Bovril bottle. Available in sizes from 1/2oz to 16oz, Bovril was a source of meaty nourishment used in soups, stews, gravies and on sandwiches since 18??.

Neil Meyer, of Savoury Food Industries has very kindly agreed to be our first sponsor and is, I am sure, hard at work gathering information relating to Bovril through the ages.

There are some extremely interesting and really scarce Bovril bottles and advertising wares/signs and Neil, who will be visiting Bovril UK towards the end of the year, will be assisting us to reproduce the original Bovril labels as they appeared in the early 1900's.

Marmite too, is more than 100 years old and Neil will be furnishing us with information on this product as well.

Chamberlains Cough Remedy has been soothing throats and doing its thing for more than 100 years. There are a number of Chamberlains bottles to be found including the ultra rare (Abrie Burger) Cobalt-blue as well as Chamberlains Pain Balm, Colic, Cholera and Diarrhoea remedy and the standard cough rememdy available in three different sizes. We hope that Warner Lambert S.A. (PTY) shed a little more light on this company in the near future.

One could be forgiven for forgetting (or not even knowing) that Coca Cola is more than 100 years old. Pictured above are the only Coca Cola bottles in my collection, the oldest of which is just under 70 years old (1937) as well as a small snippet of interesting information (below).

The bottle in the centre is embossed Buffalo N.Y. underneath and the one on the far left is dated 1937. 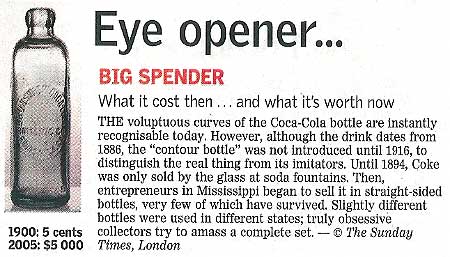 The addition of Coca Cola to our Brands page opens up a whole new vista of opportuinity. I can kick myself for having, in the past, avoided digging in dumps which I considered too new (i.e. after 1920) however, I still know where most of them are in Randfortein, Krugersdorp, Boksburg and Benoni.

Eno's Fruit Salt in its characteristically shaped bottle is a must in any bottle collection. The crisply embossed top which was secured with a strip of cork is probably one of the first finds the new bottle digger makes.

We look forward to receiving more information from Group Laboratories, Cape Town regarding the early history of the company. Click for early advertisment. 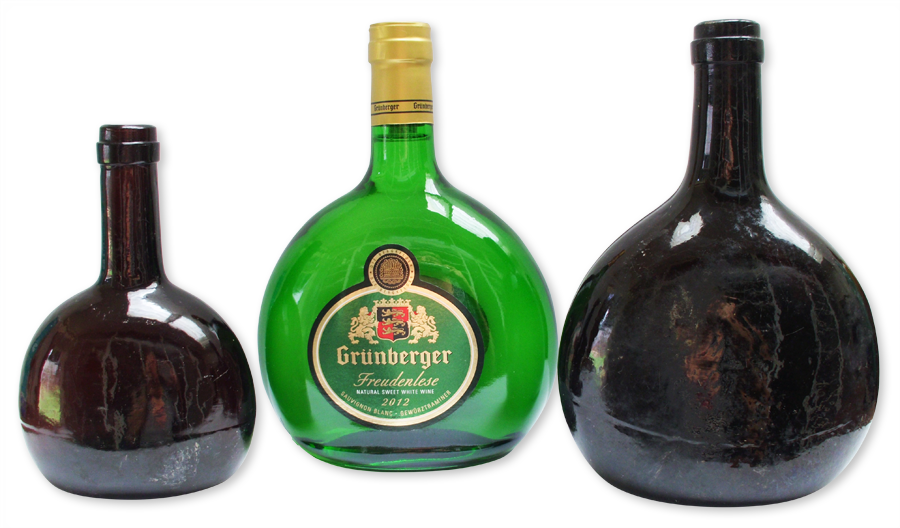 The bottles to the left and right of center were dug at the, now famous, Mortuary dump and date to c.1875. The bottle in the middle was bought at Constantia Liquor Cellars last week (May 26 2014). Some years ago there was a fierce litigation involving copyright infringement by a supermarket which was bottling a house wine in the uniquely shaped old bottle style. Needless to say, the supermarket won!

Holbrooks Worchestershire Sauce bottles are probably the most commonly found of all dug bottles but have an extremely interesting past. Colmans (the mustard people) are the distributors of this fine product and we look forward to Tiger Food Brands Ltd involvement on this page.

Who would have though that Horlicks is 100 years old? The bottle on the left embossed HORLICKS MALTED MILK RACINE, WIS. USA LONDON, ENG. has a ground top and early screw thread. I am sure that SmithKline Beecham (S.A.) can shed some light on the fascinating history of this company.

It is probably the potency of Jeyes Fluid that has prompted Adkock Ingram to package this product in a more robust packaging than the glass bottles of the 19th Century. Pictured above are four of the old bottles, from the left, an early fluted honey-brown bottle embossed Bottles By Jeyes, next a really pretty reddish-brown tall neck bottle embossed on Yeyes Fluid on both side panels. Also embossed on the side panels, a scarce light-green variety and finally the more common front embossed brown bottle. Adkock Ingram has a rich history of suppling pharmaceuticals to the South African market for more than 100 years.

BROOKES "LIMOS" was established in 1899. The bottle on the left is an early (and highly prized) example. Next to it a later screw cap version still with the tapering half round and 3 flat panel format full of embossing with patent dates 1924, 1926 and 1933. Next to that, a round bottle similar in size and shape to the current day format on the right.
Bromor Foods put up a wide range of squashes under the trade name Oros.

So call me a liar for 13 months! The light-blue applied lip bottle is embossed REG'D IN U.S. PAT. OFFICE AUG. 21 1906. To its left, the bottle (made in USA) is embossed THE CHAS. H. PHILLIPS CHEMICAL COMPANY. GLENBROOK CONN

Up until recently Phillips Milk of Magnesia was still available in its cobalt-blue glass bottle. The new plastic packaging of PHIPP'S bears the old Phillips crest and so we presume, is a descendant of the original. Adcock Ingram Limited will hopefully enlighten us.

Roses Lime Juice (now cordial just to be politically correct) must have saved the lives of many a British sailor. We have some fascinating history on this product and we hope that Bromor Foods will be able to assist us further.

How can a Brewery possibly not succeed anyway? The South African Breweries Ltd was registered in London on May 15 1895. The 2 left hand bottles were dug from a 1894 dump indicating that SAB was already trading in South Africa at that time.

Pictured above are just a few of the SAB products currently available including my own favourite tipple, Amstel Lager and Brett, our web designer's favourite, Black Label.

We hope that South African Breweries will contribute to the website and help us to unfold their fascinating success story learning along the way more about Anders Ohlsson, Charles Glass, Charles Chandler, Frederick Mead, Loius Luyt and Anton Rupert... Cheers!

Of all the 100 year old products, Scrubbs Ammonia has stuck most closely to their original format of packaging. Pictured above are three of their early bottles and although the scarce dark-green variety shown is not embossed, it would certainly have contained Scrubbs Cloudy Ammonia. Again, Adcock Ingram has taken over a winning and enduring brand.

Although we are not eaxactly sure when Vaseline originated The bottle on the far left (turned purple by natural sunlight) is an early example. Vaseline is currently distributed by ELIDA POND'S.

Unfortunately the old Vicks bottles pictured only bear the brand name on the base but, as can be seen are still similiarly shaped. The two small bottles on the far left are VICKS DROPS

Woods Great Pepperment Cure are to be complimented on at least having stuck to the original shape of their bottle.

I never realised that this product was more than 100 years old until having recently dug a bottle in a c1910 dump. 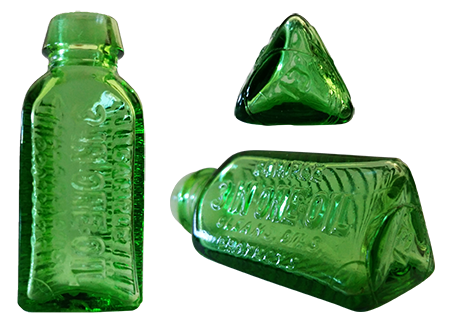 The little gem, pictured above, was dug from a considerably older dump in De Aar, by Jaco Blom. The bottle is only 4.9cm and has a triangular shape. 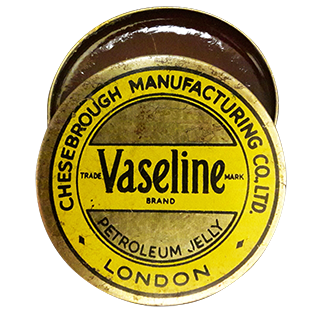 I found this beautiful tin, still half full, in my Dad's toolbox recently. It dates to pre 1945 .